That time of year has come: Tax season. While you may have just started preparing your tax returns, identity thieves have been gearing up for months now in hopes that they’ll be able to steal your refund before you even get a chance to file.

This specific type of identity theft, tax identity theft, happens when someone files a fake tax return using your personal information – like your Social Security number (SSN) –  to claim a fraudulent refund. It can also occur when someone uses your SSN to get a job or claims your child as a dependent on a phony return.

Although tax ID theft has decreased over the past few years – with the number of tax-related identity theft victims falling nearly 65 percent between 2015 and 2017  – the IRS still estimated that $12.2 billion in fraudulent refunds were attempted in 2016. And with an expected $300 billion to be refunded to taxpayers this year, you can expect that identity thieves will be jostling for their piece of the pie.

To protect yourself this tax season, know the lengths fraudsters will go to take your personal information and the steps you can take to combat tax identity theft. 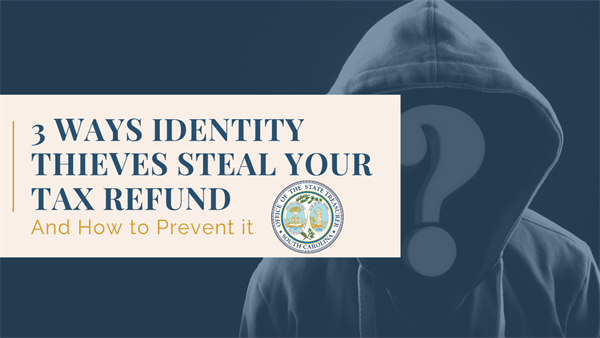 Treat your trash carefully. Tax identity thieves will go through your garbage in an attempt to search for personal information. Be sure to shred or destroy tax return, drafts or calculation sheets you no longer need, as well as any other documents containing sensitive information.

Unfortunately, identity thieves will put on an Oscar-worthy performance to trick you into handing over your tax refund. Scammers will pose as the IRS to solicit your personal information via phone, going as far as to altering the caller I.D. to make it look like a legitimate phone call from the agency, as well as using fake names and IRS identification badge numbers.

It’s important to know that the IRS will never initiate contact with you over the phone – or by text message or social media, for that matter. If the IRS needs to contact you, it will do it first by mail. If you have any doubts about who is contacting you, you can call the IRS directly.

Don’t expect any emails from the IRS either. Phishing scams have been around since the dawn of email – just think of that Nigerian Prince who asked you for a few dollars back in the day – but, over time, they’ve become increasingly more popular and convincing. In fact, during the 2016 tax filing season, the IRS issued a consumer alert for email schemes after seeing a 400 percent increase in phishing and malware incidents. Fraudsters send emails representing themselves with fake credentials or phony email addresses in an attempt to trick unsuspecting victims into revealing personal and financial information.

As previously mentioned, the IRS will only contact you first via mail. Do not click on links or download attachments from unknown or suspicious email addresses. If you receive an email from the IRS, delete it immediately.

Thousands of people have lost millions of dollars and their personal information to tax scams. Even worse, many victims do not even realize what has happened until filing their own tax return and discovering that one has already been filed using their information. That’s why fraud detection and proactive steps for identity theft prevention are so important.

For those that may have already fallen victim to tax identity fraud and had their personal information compromised, don’t panic. The IRS offers a number of resources and recommendations. You can contact the IRS Identity Protection Specialized Unit at 800-908-4490, or visit IdentityTheft.gov, the federal government’s one-stop resource to help you report and recover from identity theft. There, you can report identity theft, as well as get step-by-step advice, sample letters and your FTC Identity Theft Affidavit. These will be able to help you fix problems caused by the theft.

More information about tax identity theft is available from the FTC at ftc.gov/taxidtheft and the IRS at irs.gov/identitytheft.

Curtis Loftis is the South Carolina State Treasurer. As Treasurer, he is the state’s "private banker,” managing, investing and retaining custody of tens of billions of dollars in public funds.

The South Carolina Department of Revenue (SCDOR) is the state agency responsible for the administration and regulation of tax laws in South Carolina. If you suspect or know of an individual or company that has committed tax fraud in South Carolina, or if you think you may be a victim of identity theft that has led or could lead to tax fraud, you can file a report with the SCDOR at dor.sc.gov/report-tax-fraud.