Treasurer Curtis Loftis has been applauded by a member of the community for his fight to draw attention to the broken South Carolina pension system.

In a letter to the editor of GoUpstate.com, a first responder points out how Treaurer Loftis has been the only one talking about the pension problems for years. 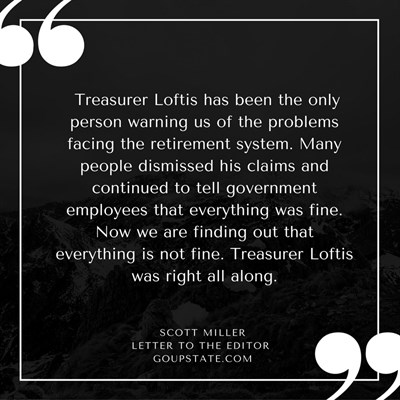 The letter says in part "I always took my pension for granted. I never really thought about it that much until a few years ago when I heard S.C. Treasurer Curtis Loftis tell a group of folks that our pension plan was in trouble. High fees and bad investments were taking their toll, and something had to be done before it was too late. Since that time, Treasurer Loftis has been the only person warning us of the problems facing the retirement system. Many people dismissed his claims and continued to tell government employees that everything was fine. Now we are finding out that everything is not fine. Treasurer Loftis was right all along."

The letter was submitted by Scott Miller of Chesnee.

Treasurer Loftis says he is just doing what he has always done, trying to protect the people of South Carolina.

"I am proud to fight on behalf of the working people of South Carolina," said Treasurer Loftis. "It's important to make sure the citizens being affected by the problems facing the state pension know about them. The legislature needs to come up with a permanent way to fix the pension, and not just continue to develop temporary solutions.

Read the full article: Wednesday's letters: Our treasurer was right