If your children started back to school last month, you may have paused for a moment to consider their future as they headed out the door.

It’s only natural to think ahead – given that fall is the time of year when parents and children both start anew. It’s also why many states celebrate College Savings Month in September by encouraging residents to take advantage of their state’s 529 plans, if they haven’t already. Because saving for your child’s future is one of the most critical decisions a family can make. 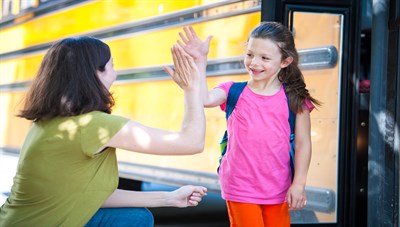 That’s why we decided to take a closer look at how Americans are saving, particularly here in South Carolina, and what we can take away from it all.

“One of the more positive pieces of national news we’ve seen is that more parents are saving for college and they’re saving more,” said South Carolina Treasurer Curtis Loftis.

Parents are also feeling more positive about saving for college in general, the study noted. More than half reported feeling confident they would be able to meet the cost of college – good news considering the cost of a four-year degree is steadily rising.

“That’s a trend we’ve been seeing for awhile now,” Loftis said. “Unfortunately, we don’t see that trend ending anytime soon. That’s why I feel strongly about getting the word out about the importance of starting early and using a tax-advantaged 529 plan such as Future Scholar.”

The increased cost of a college education and uptick of student loan debt could be in part what’s driving the use of 529 savings plans. In fact, the number of 529 accounts jumped from 12.1 million in 2014 to 12.5 million in 20152, according to savingforcollege.com.

Still, many more savers are unaware of the tax advantages of 529 plans and continue using other means for saving.

Case in point: Six in 10 parents, or 61 percent, are using general savings accounts while nearly four in 10, or 38 percent, are using checking accounts to save for college, according to Sallie Mae. More than half of those saving for college but not using 529 plans say they are not aware of these tax-advantaged plans.

Meanwhile, many new parents have cited their own difficulties in paying off student loan debt as being a motivating factor for why they decided to open a 529 plan for their own children.

“We are encouraged that this newer generation of savers seem to be more receptive to the message of getting started early,” Loftis said. “That’s good news when you think about future generations who will not be saddled with the burden of student loan debt.”

Here in the Palmetto State 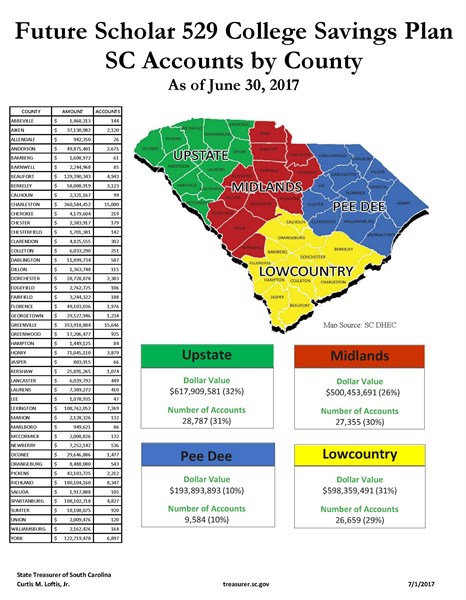 With the number of accounts now topping 134,000, it’s evident that many parents have discovered the advantages of using a Future Scholar plan to save, Loftis said.

“We’re also encouraged to see that size of contributions have also increased,” he added. “Contributions to the plan have increased 28% over the previous year and the average account size has risen from $8,233 to $20,222.”

The plan’s many advantages have also caught the eye of national analysts and those who rate 529 plans. Future Scholar has consistently earned high rankings from savingforcollege.com, for example, and has earned the website’s highest ranking of five caps.

In addition, the investment research firm Morningstar, also gave Future Scholar a Bronze rating and took note when South Carolina aggressively negotiated for lower-cost investments when its 529 program management contract came up for renewal in 2012.

“South Carolina’s direct-sold Future Scholar 529 program is a notable example,” the firm stated. “The Columbia-run plan dropped its prices to become one of the cheapest on the market. …Additionally, the direct-sold plan has no program management fees. Now the plan is even cheaper than New York's 529 program and the Utah Educational Savings Plan, which are much larger plans by assets under management and historically had been the lowest-priced index options available to college savers.”

If there are lessons or key takeaways parents can glean from what the data shows, there are several.

First, it remains important to start as early as possible, especially since there is a shorter window of time for saving for college than with other savings goals such as saving for retirement.

“The more you can save now, the more you can lessen your children’s financial burden later when it comes time to pay for college,” Loftis said. “You don’t want them to have to start their lives as new graduates with crippling student loan debt.”

“As we head into the last quarter of the year, and parents begin to plan for taxes and potential deductions, they should definitely keep in mind South Carolina is one of the few states that allow a dollar-for-dollar tax deduction on its 529 plan,” Loftis said. “What that means is not only will your money work harder using a 529 plan, but you can save even more using South Carolina’s Future Scholar College Savings Plan.” 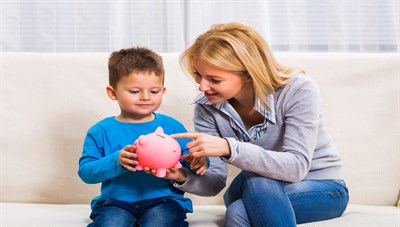 Finally, parents using Future Scholar shouldn’t hesitate to enlist family and friends to help fund their children’s college accounts. Recent research on those who are saving have shown older generations, such as grandparents, are stepping up in greater numbers to help pay for their grandchildren’s college – especially as the cost of a four-year degree continues to rise.

“Opening a Future Scholar account for a grandchild, or making a contribution to a pre-existing fund makes a great gift that they’ll never outgrow,” Loftis said. “What’s more, we have a great online tool called eGift for those who want to create an invitation around a special occasion such as a birthday to let others know how they can contribute to your child’s Future Scholar account.”

“Either way, starting your child on the path to financial security is wise a decision and one you’ll never regret,” he said.

For more information or to open a Future Scholar account today, visit www.FutureScholar.com.