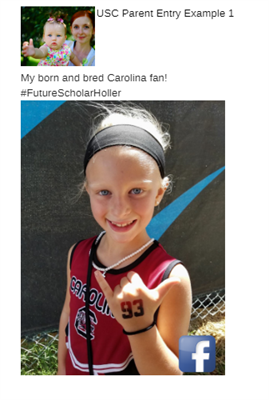 From September 18 until October 20, parents are invited to enter the sweepstakes by posting a public photo to their personal Facebook page of their child or family decked out in USC or Clemson gear with the hashtag “#FutureScholarHoller.” One fan from each school will be randomly selected to win a prize pack and a $529 Future Scholar contribution.

“The Future Scholar Holler Sweepstakes celebrates our State’s fun football traditions while highlighting the importance of saving for college with a Future Scholar 529 plan,” said Treasurer Loftis. “Whether they holler for Clemson or Carolina, I hope parents and kids will get excited about college and start planning now to make a college education less of a financial burden in the future.” 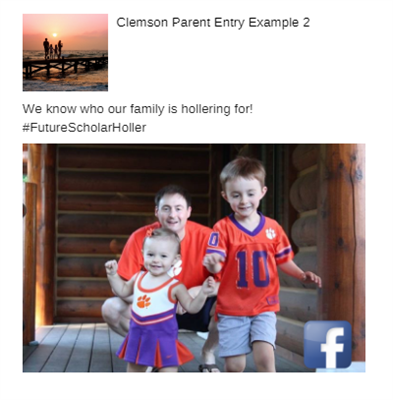 Entrants must be the parent or guardian of a current or potential Future Scholar beneficiary, who must be a legal resident of South Carolina under the age of 18 (infants to high school seniors). There is a limit of one entry per participant, and participants must “like” the Office of South Carolina State Treasurer’s official Facebook page to qualify. Winners will be announced on Facebook on October 23. No state funds are used for this sweepstakes, in the marketing of this sweepstakes or Future Scholar.

For a complete list of sweepstakes rules and guidelines, visit: www.futurescholar.com/holler

Future Scholar is South Carolina’s 529 College Savings Plan. It is administered through the State Treasurer’s Office. For more information, visit FutureScholar.com or follow @SCStateTreasurer on Facebook.