The original article appeared in the Wall Street Journal. It was written by Ben Eisen and Aaron Kuriloff.

"In Scramble for Yield, Pension Funds Will Try Almost Anything"

The Wall Street Journal -- Some pension funds are seeking to profit from others’ fear.

Pension funds in Hawaii and South Carolina are plying an arcane options strategy called cash-secured put writing. In a typical trade, the investor sells a contract, known as a put, to someone who owns stocks and is willing to pay up for protection in case they decline. If, within a certain time, the shares fall below a given price, the investor buys the stocks at that price, or covers their lost value.

The upside for the pension funds, which are writing options on the S&P 500 index, is that they earn regular income. The strategy aims to work like a volatility dampener. If stocks fall, the income the funds have collected on the options contracts should help cushion any hit they take on the puts and their own separate stockholdings. The pension funds set aside some cash-like instruments such as Treasurys for the payouts, so they aren’t caught without money if the market goes against them.

The cost of options tends to rise when investors expect big market swings, so the strategy does best when investors are fearful and paying up for protection against a downturn—and a downturn doesn’t materialize.

But if protection is cheap and the market takes a big fall, the pension fund can end up with losses.

“There comes a point where you might be picking up pennies in front of a steamroller,” said Nathan Faber, vice president of investment strategies at Newfound Research, an investment manager that uses put writing, but not tied directly to the S&P 500. 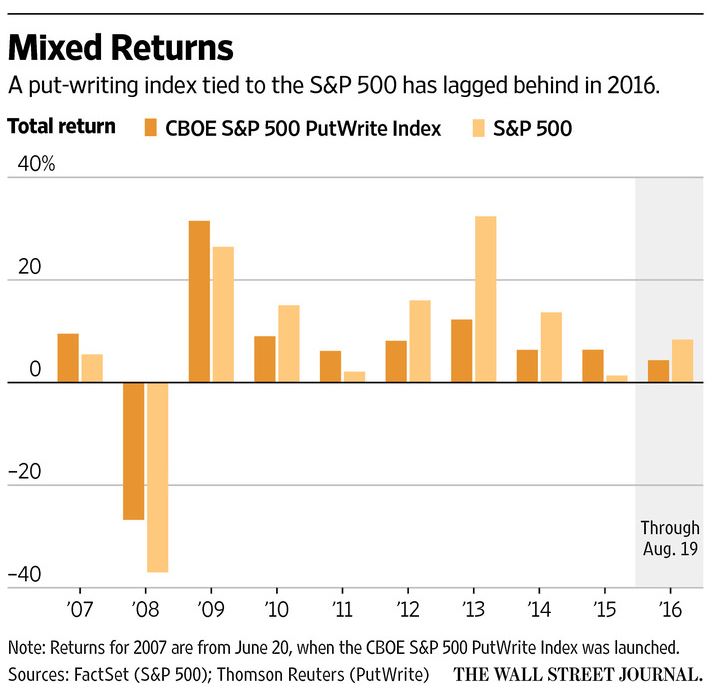 Photo from The Wall Street Journal

For some, the approach offers a way to generate income, which can be especially attractive with government-bond yields at record lows.

Matt Moran, vice president of business development at the Chicago Board Options Exchange, described the put-writing approach in terms of baseball: Over long periods of time, the strategy hits a lot of singles and doubles, but can also hit fewer home runs and hits into fewer double plays than the S&P 500.

The CBOE S&P 500 PutWrite Index, a benchmark for the strategy, has returned 4.4% this year through Friday, versus an 8.4% total return for the S&P 500, which includes dividends. The PutWrite index didn’t fall as sharply as the market during the selloff of early 2016, but has lagged behind the rallies. In 2008, during the financial crisis, the put-write strategy returned minus-27% compared with the S&P 500’s return of minus-37%.

CBOE’s calculations of how the index would have performed before its 2007 creation estimate that annualized returns over the 30 years through this June were 10%, narrowly topping the S&P 500.

Risk mitigation was behind a decision by the Hawaii Employees’ Retirement System to invest $1.6 billion of its $15 billion portfolio in a put-writing strategy, which it expects to be fully invested by October. Based on how the options would have been priced last week, Hawaii could generate about $19 million a month in income if it wrote puts on the full amount and the options weren’t exercised, according to Neil Rue, a managing director at Pension Consulting Alliance, an independent firm that works with the pension fund.

Hawaii wanted to diversify market exposure after the financial crisis hit many assets at once, according to Vijoy Chattergy, chief investment officer at the pension fund.

“After the great financial crisis, we recognized that there was a lot of risk in our portfolio,” he said. “We’ve been in an ongoing effort to address those concerns and understand them.”

Pension Consulting Alliance first suggested Hawaii use the strategy and currently advises on it, Mr. Chattergy said. In a January 2015 presentation prepared for the pension fund, the consultant described put writing as offering “favorable risk-adjusted returns,” because buyers of put options tend to overpay for insurance.

South Carolina’s goals were similar. The approach is a complement to the traditional equities risk in other parts of the commission’s $28 billion portfolio, said Geoff Berg, acting chief investment officer for the South Carolina Retirement System Investment Commission. It has committed about half of a $1.4 billion equity options allocation to the strategy.

South Carolina Treasurer Curtis Loftis, who is a member of the pension fund’s investment commission, has been critical of the fund’s decisions in the past. He voted to approve the put-writing strategy, but remains cautious about it.

“l think it’s difficult to assess the true risk of these strategies,” Mr. Loftis said. He added, “one of the great untold stories of the pension world is how we have underestimated risk.”

Some are also betting there is a market for this strategy among retail investors. WisdomTree Investments WETF  introduced its CBOE S&P 500 PutWrite Strategy exchange-traded fund in February, which has $12.2 million in assets. And Neuberger Berman filed a registration statement in June for a mutual fund that will employ a put-writing strategy, though it isn’t yet effective and the fund hasn’t commenced operations.