Treasurer Loftis Praised in Letter to the Editor

Columbia, SC - Treasurer Curtis Loftis has been fighting to draw attention to the issues facing the state pension system for years. 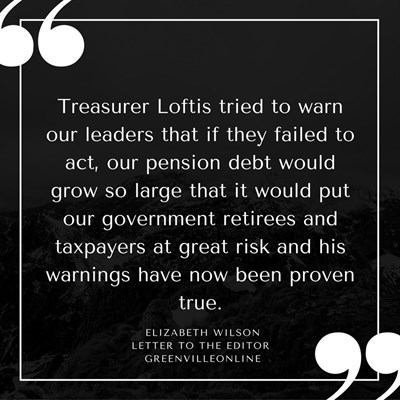 Recently, the Treasurer was praised in a letter to the editor from GreenvilleOnline.

In part, the letter says "Experts have testified that our state pays too much and earns too little on its investments and that our investment portfolio is so expensive and complex that the pension now has a debt of over $22 billion and climbing. For the past four years, our state Treasurer Curtis Loftis has been saying all of those things and it has fallen on deaf ears. Nobody listened. No action was taken."

The letter was written by Elizabeth Wilson of Simpsonville.

Treasurer Loftis says he's encouraged that people are finally noticing the problems. "It's great to see South Carolina media covering the pension problems, which has led to South Carolinians starting to realize the gravity of the situation," said Treasurer Loftis. "It's important that I keep fighting to make sure the problems are fixed, not just swept under the rug with a temporary solution."

The letter to the editor goes on to talk about the issues the taxpayers will now face, and how listening to Treasurer Loftis could have helped avoid a possible tax increase.