Home / About Us / Newsroom / Windley Joins S.C. Board of Financial Institutions 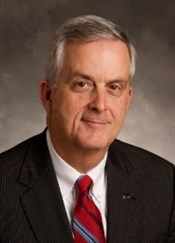 Windley, president of Columbia-headquartered South State Bank, has spent 43 years in banking. Until July he was also president of South State, the largest bank based in South Carolina.

“John brings a wealth of experience and a substantial understanding of how the state’s financial services industry works,” said State Treasurer Curtis Loftis, who serves as chairman of the Board of Financial Institutions. “There’s not much he hasn’t seen or done in the banking business during his career. This will be of great benefit to the Board’s work.”

Windley is a native of Mount Airy, N.C., and a graduate of Wofford College. He succeeded Robert R. Hill Jr. as CEO of South State Bank in 2016. Windley took over as South State Bank president and chief banking officer in 2004.

“I look forward to serving the State of South Carolina and the various financial partners that support the growth and development of our great state,” Windley said.

For more information on the Board of Financial of Institutions, please visit bofi.sc.gov.