Davis came out of retirement to lead the Office of the Commissioner of Banking, which is charged with chartering, examining and regulating South Carolina state-chartered banks and credit unions. According to Treasurer Loftis, Davis has done an outstanding job in his tenure as Banking Commissioner. 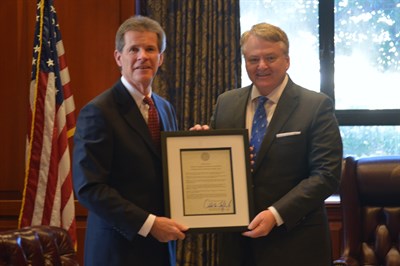 “Bob has significantly transformed the agency by implementing regulatory best practices, increasing staff education and recruiting additional talented professionals,” Treasurer Loftis said. “He also shepherded the agency through the milestone of its first national accreditation. His keen focus on increasing communication and transparency with the institutions supervised by his office are a testament to Bob’s vision and work ethic. We appreciate all he has done for our state’s banking community.”

Davis brought 40 years of financial and legal expertise to the Office of the Commissioner of Banking, including proficiencies in litigation, regulatory compliance, legislative and corporate governance matters. After beginning his career in a private law firm, he worked in the law department of the Office of the Comptroller of the Currency (OCC) during the 1980s where he held several titled positions, including Assistant Director of its Enforcement and Compliance Division as well as Director of the Bank Organization and Structure Division.

After leaving the OCC, Davis served as a member of the executive management teams and General Counsel of three different bank holding companies, including the parent company of First Federal Bank of Charleston, which merged with South Carolina Bank and Trust in 2013 to form South State Bank.

“I have thoroughly enjoyed my time as Commissioner of Banking.  The responsibilities of serving in this role drew upon all of my career experience, and I am proud of the steps forward that we have achieved.  I appreciate the support provided by the employees of the agency and I am grateful to the members of the Board of Financial Institutions and particularly to Chairman Loftis for the opportunity to serve South Carolina.”

The Board has appointed Chief Bank Examiner Rick Green to serve as the interim Commissioner of Banking upon Davis’ retirement.

For more information on the Office of the Commissioner of Banking, please visit banking.sc.gov.